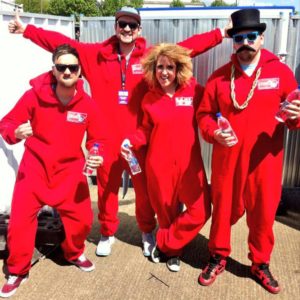 Formed in late 2012, Big Beat Bronson are the brain child of producer / rapper Baron Von Alias. Baron had been writing and recording with MistaBreeze as a three piece playing shows up and down the country with their DJ LKP, (including BBC Radio 1’s Big Weekend) but were quick to realise there was that little something missing from their outfit. Familiar with the sweet tones and unadulterated vocals to die for of local Whitley Bay lass Eliza, they were keen to have her write and feature on one of their tracks. And they were very right to trust their instinct, as soon as her vocals hit their beats, Big Beat Bronson were born.

And it didn’t take the four-piece long to firmly cement themselves in the world of radio. In October 2012 one of their tracks was playlisted on the BBC Introducing playlist, giving them spot plays and support from big Radio 1 names including Fearne Cotton and Scott Mills (who even tweeted about his love of their track “New Me”). XFM DJ Eddy Temple-Morris has since announced he is a big fan of the band, and even listed them on his XFM “Nu Breed 2013” as ones to watch, alongside the likes of Rudimental, Skrillex & Disclosure.

Although Big Beat Bronson is a new venture for these four Geordie charmers, music is definitely in their blood. The list of artists and DJs they have worked with and shared stages with as individuals across the years speaks for itself. Some names include; Grandmaster Flash, Diplo, Shy FX, Rizzle Kicks and Foreign Beggars to name a few. As no strangers to the stage, their live act sees them bring a theatrical flair to their music, with no two shows ever being the same. This has enabled them to sell out headline shows at every music venue you can think of in the North East (including the O2 Academy), as well as playing the main stage at the Loftas Festival in Lithuania and Evolution Festival in the UK in 2013. If that wasn’t proof enough of their excellence, they also played the BBC Introducing Stage at the T In The Park Festival on 13th July 2013

Following on from 2013, this year Big Beat Bronson shall be making a special appearance at the Secret Garden Party 2014, opening the main stage at Split Festival in Sunderland and tearing the place down at Middlehaven Festival 2014.