WipEout, a game known for it’s blistering speed, iconic music and pure multiplayer mayhem has added 28 licensed music tracks in it’s new “WipEout Collection” released on the 7th June from famous musical artists including Swedish House Mafia, Chemical Brothers, and The Prodigy and our very own CODE:MANTA with his track “DFCK”! 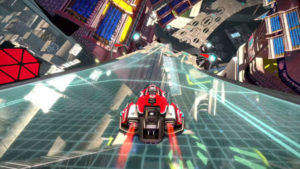 A name that has been described by Gematsu as synonymous with PlayStation and has been played on every Playstation format since 1995, WipEout is the rapid combat racer that defies gravity and defines generations; the collection brings together all previous content from WipEout HD, WipEout HD Fury and WipEout 2048, and enhances it for PlayStation 4 and PlayStation 4 Pro with reworked textures, improved graphics and HDR support.

The full soundtrack has been revealed by Sony Interactive Entertainment which features a mix of tracks from “WipEout legends” in addition to unreleased tracks from “breaking artists”, the full playlist (Which we can’t get enough of!) is available to listen to in full on Spotify!

Listen to CODE:MANTA’s “DFCK” over on our SoundCloud and listen out for it in game: