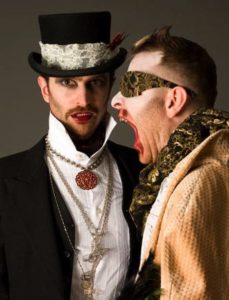 From the casino rooftops of Vegas to Armani’s yacht in Monte Carlo, the Don-Daddas of DJ Duo-dom, Kaiser Saucy & Lord Fader have come a long, long way from their humble beginnings in a bedsit in South London, to being amongst the UK’s most critically, media and industry acclaimed Artists, DJ/Producers and Radio Broadcasters.

After big US remixes for Rihanna, Brandon Flowers, Lady Gaga and Beyonce, and hitting 1.6million views on Youtube with their re-work of the Ray Charles classic, Hit the Road Jack, the Cannons have gone back to the nu-disco dancefloors they started out on for 2012. Named after their roadblock night in London, forthcoming collaboration with Nom de Strip- Get Involved- Got Kissy Sell Out excited enough to play it on his Radio1 show before Hysterical Records picked it up. What they have lined-up after that goes even deeper, introducing their BumpHouse sound this summer with their Clean Hit EP. Meanwhile the live band’s foray into Victorian Horror Rock ‘n Roll – The Ballad of Lego Johnson- signed as an album project to MTV through Hype Music in the US. With music regularly featured on US shows Jersey Shores and Plain Jane, they are currently recording new songs with Motley Crue Love Legend, Tommy Lee. They take the live band on tour to China for the Big Love Festival in June.

“Undoubtedly the finest party djs this side of Mars and our Bestival after-party DJs of choice.”
Rob Da Bank

“The Loose Cannons have got Tiger Blood.” Charlie Sheen